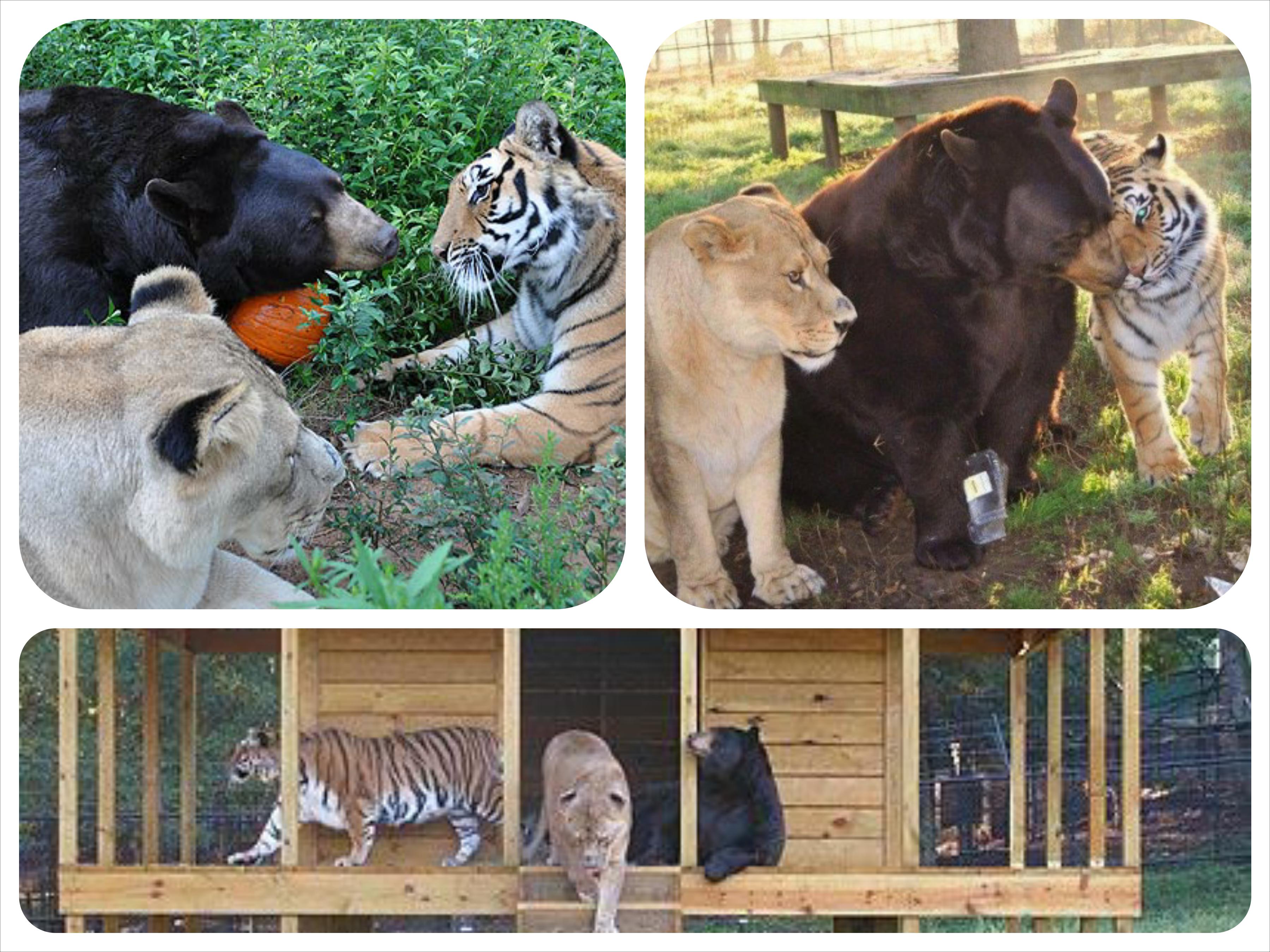 In Locust Grove, Georgia at Noah’s Ark animal rescue sanctuary, the most unlikely of trios have found a home.  Leo the lion, Baloo, an American black bear, and Shere Kahn, a bengal tiger, cohabitate and live a playful life full of fun and harmony.

The three animals were rescued 12 years ago while they were still cubs from drug dealers who thought is was a good idea to have the animals for pets.  The animals were severely abused and neglected.  Baloo was in the worst shape as the harness that was on him was never adjusted and as he grew, became implanted in his skin.  It had to be surgically removed.  Leo’s nose was almost completely raw.  The animals were psychologically damaged as well and the curators were initially worried they wouldn’t survive.

After being rescued, the animals were placed in separate pens.  They began acting up and continued to deteriorate.  Not knowing what else to do, the trainers decided to put the three deadly predators back together.  Almost immediately they perked up, became more active and lively, and began getting better.  “There now 100% recovered,” says Allison Hedgecoth, a trainer at Noah’s Ark.

Even in the animal kingdom, differences can be set aside.  As Hedgecoth profoundly states, “They live together and don’t see their differences.  They don’t see their color differences.  I think that ordeal they went through really bonded them.”  It’s amazing how life’s worst circumstances can foster life’s best outcomes.  Where we start does not mean that is where we’ll remain or that’s where the story has to end.  These three animals were seemingly destined for a cruel and harsh life that more than likely would have resulted in a painful death.  But fate saw otherwise and not only were they rescued and relocated to a better place, but in the process, they forged a lifetime bond that not even the experts can explain.

So how much greater can it be for us humans.  Our destiny has only begun and despite where we currently may, what our circumstances look like, and all the hardships that lie ahead, we too can find happiness, overcome, and turn our lives around;  and just maybe, find lifelong friends to share our journey with.  Baloo, Leo, and Shere Kahn are a wonderous example of how predatory enemies can see past what society and the pundits think they should be or the boxes they try to put them in and revolutionize their lives in magnificent manner.

How much better would we all be if we saw past the differences and recognized the beauty and friendships within?  Think of all we could learn from each other and the communities we could build, living together in peace and having a good time.  What a great lesson taught by a lion, a bear, and a tiger… oh my!