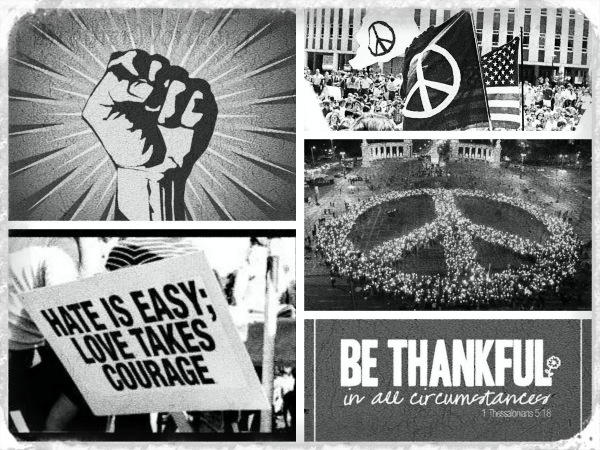 “Never be afraid to raise your voice for honesty and truth and compassion against injustice and lying and greed. If people all over the world…would do this, it would change the earth.” ~ William Faulkner

It is hard to be THANKFUL when you are watching fellow citizens choked to death, gunned down, and beaten like savages by those who have been sworn to protect us.  Over the past several months and weeks we have all heard the reports and even seen the horrific images of one man choked to death, another riddled with bullets, and a woman brutally beaten by supposed officers of the law.  Worse, it has happened more times than it ever should.  There is no excuse or rationale that will ever be able to explain these senseless acts, but even in the midst of all hell breaking loose, I am still THANKFUL.

I am also angry.  I am angry that lives have been snatched without rhyme or reason and families and communities have been violated and destroyed.  I am angry because those we trust to serve and protect us have taken liberties that were never intended and instead of serving the neighborhoods they patrol, they are bullying them and enforcing their will under the disguise of “peace officers.”  How ludicrous is that!  If that is not an oxymoron I don’t know what one is.  And let us not turn a blind eye to a glaring fact.  There are two things at the forefront of these travesties – African-Americans are being singled-out and brutally attacked at an alarming rate and police have become so afraid for their own lives and safety that they have lost all tactical ability to analyze a situation and adequately diffuse it without extreme force.  It is sickening to say the least.

The breakdown of trust between law enforcement and Joe citizen is nothing new, but it is now pervasive and getting worse.  Nonetheless, I still remain THANKFUL!  I am THANKFUL because there is a rallying of people from all walks of life who are paying attention, who are just as horrified as I am, and who are eager to find an amicable resolution.  The greatest of tragedies are a prelude to the grandest of triumphs and I am THANKFUL that when the dust settles, we will all be better.

My heart cries out to the families who have lost their loved one and nothing will bring them back and very little will soothe that pain.  To the families of Eric Garner, John Crawford, Ezell Ford, and Michael Brown my words to you are “to be absent from the body is to present with the Lord” (I am THANKFUL for that) and to not let their deaths be in vain.  As much as the loss and separation, especially that at the hands of another, will haunt you, honor their lives in a positive light and make sure anyone who will listen will hear their stories and be the better for hearing it.  I am THANKFUL that even in tragedy, lives can and will be transformed, lessons learned, and the death of another will prove valuable in saving someone else’s life.

Lastly, I am THANKFUL for those that have peacefully joined in protest to fight the atrocities that have continually plagued our communities.  In the video below (Warning: graphic images and language) the most poignant statement is when the gentleman speaks about sharing dialogue and marching together.  How wonderful would it be to no longer be at odds, but come together to better our communities, reestablish trust between officers and citizens, and hold both the people and the police accountable for the well-being of our neighborhoods.  That is a hope that can become reality and for that, I am THANKFUL.

“Peace cannot be achieved through violence, it can only be attained through understanding” ~ Ralph Waldo Emerson

#ThankfulThursday - When #Thankfulness is your anc