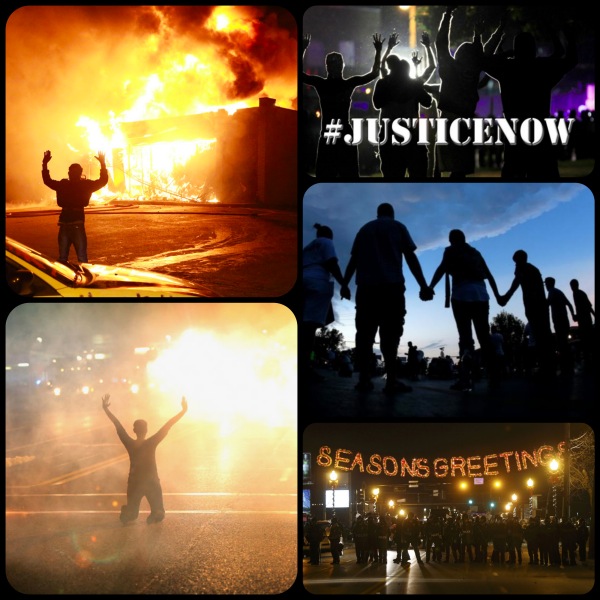 “Injustice anywhere is a threat to justice everywhere. We are caught in an inescapable network of mutuality, tied in a single garment of destiny. Whatever affects one directly, affects all indirectly.” ~ Martin Luther King, Jr.

Twenty four hours later and I am still a mix of emotions.  Part sadness, part anger, part disbelief, part confused, completely drained.  It is hard to be optimistic when there is so much oppression; difficult to be positive when there is continued police brutality; almost impossible to be hopeful when at every turn, hatred is spewed with no regard for humanity.  Worse, as an African-American male in today’s world and a mentor to many young men of all ethnicities and from varying backgrounds, it has become difficult to convince them that society, especially those that have been tasked with protecting them are the very ones they have to fear.

In the wake of the #Ferguson riots, many sit numb, dumb-founded, and at a lost.  The lack of an indictment for Darren Wilson, although not surprising, still hurt and left a community and country feeling helpless and defeated.  There is no other compensation for this magnitude loss other than praying for justice to be served.  What is anyone supposed to do with that very entrusted judicial system fails?  How is it possible to expect equality, let alone compete against, a mainframe that is purposely designed to break your will, take advantage of the less fortunate, and shatter hope?  When the prosecuting attorney, Robert McCulloch, has a personal agenda and uses his position to influence the jury and presented a case that was an atrocity to the profession.  Every prosecutor walks the grand jury through the process, streamlining the law and explaining the various charges, practically guaranteeing that an indictment of some sort will be rendered.  Mr. McCulloch did the complete opposite by bombarding the grand jury with an enormous amount of legal jargon and materials knowing it would be too much for the most savvy of legal experts to decipher, let alone a group of citizens who are not versed in legalities and are already under extreme pressure.  Not only where they not properly prepped, they were also left to their own vices to try to figure out what charges were applicable and how to apply the law justly.  One travesty after another.

The most compelling and damning factor was the wait to announce the verdict.  Being that there was no regard or concern for the community at any other time, why the delay?  Michael Brown’s parents were not even given the common courtesy of being told before it became public.  Talk about insult to injury.

All that said, the biggest atrocity was the rioting and damages that came in the aftermath.  I understand the anger, the hostility, the boiling desire to hurt those that caused so much hurt and wanting to avenge an apparent wrong, but at what cost?  The looting, burning of buildings, and mayhem only further perpetuated the stereotypes and crippled an already depleted community.  Those that stood by the Brown family, supported the community, gave back and uplifted those in need are the same patrons who were targeted, brutalized, and saw their life works burned to ashes.  Was that the desired effect?  It certainly was not what Michael Brown, Sr. and Lesley McSpadden, the parents of Michael Brown wanted.

“While we understand that many others share our pain, we ask that you channel your frustration in ways that will make a positive change. We need to work together to fix the system that allowed this to happen.
We respectfully ask that you please keep your protests peaceful. Answering violence with violence is not the appropriate reaction.
Let’s not just make noise, let’s make a difference.”

And there lies possibly the biggest issue.  The parents of this slain young man understand fully that the real issue is a systematic problem that requires working together in order to change the infrastructure so that it reflects the community it is supposed to police.  In a demographic that is 70% African-American, it is despicable that only 4 out of 10 citizens chose to vote in the past elections.  If you are not willing to participate in changing the circumstances, you have no right to complain about them!  I do not say this lightly or without compassion and empathy for the community of Ferguson, but I am saddened that they did not take measures to make a difference so something like this does not have to happen again.  No, there is no way to predict another black boy will not be recklessly gunned down by an overzealous officer, but there was the chance to appoint the proper personnel to defuse the current maelstrom and implement measure to educate current and future officers and begin mending the wounds.  I am disappointed that as a community we have a cry to arms when wronged, but do not share that same passion to exercise the most fundamental of rights.

Countless people have fought and given their lives so that we would not have to face this sort of injustice in 2014.  We have failed our predecessors and make it extremely difficult for the next generation.  If we are not willing to help ourselves, defend our civil liberties peacefully and through proper means, commune together to argue for equality, and work towards building a better life, why should we expect anyone else to do it for us?  It is a losing battle to think any entity, organization, group, or sect will respect us if we do not respect ourselves.

The first step to eradicating hatred, bigotry, inequality, and injustice is cutting it out at the roots.  That means electing officials who have the communities’ interest in mind and holding them accountable for the promises they make.  It means protecting and policing our own streets so we do not have to solely rely on someone from the outside who is unfamiliar and less compassionate.  It means taking pride in our surroundings and the type of businesses and people we allow to build in our neighborhoods.  It means taking pride in the upkeep and beautification of where we live and spreading the same all around us.  It means teaching and instilling in our kids everything it took to get this far and providing them the tools to continue great works.  The only thing that brings forth change is… change.  It is time to change!