Skip to Content
Home Blog Motivational Monday
“Be the change that you wish to see in the world.”  ~ Mahatma Gandhi
“Never doubt that a small group of thoughtful, committed, citizens can change the world. Indeed, it is the only thing that ever has.”  ~ Margaret Mead
“Change will not come if we wait for some other person, or if we wait for some other time. We are the ones we’ve been waiting for. We are the change that we seek.”  ~ Barack Obama 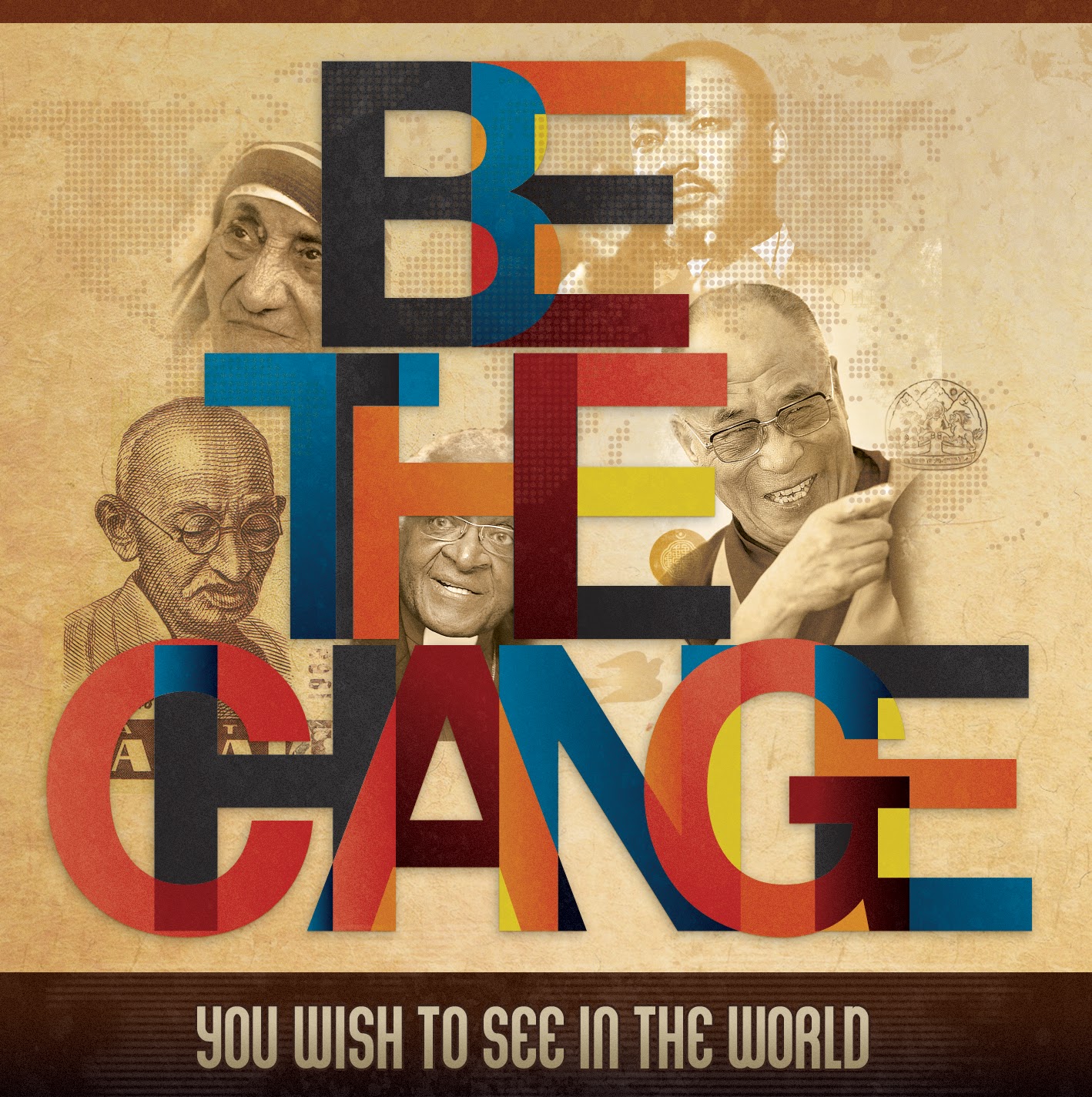 Often times society is a reactionary creature and many times the actions taken are after the fact and much too late.  It is easier to try to fix the problem after its gone awry than to prevent it before it ever has the chance to manifest.

In light of the Zimmerman verdict, I began to think of the series of events and how things could have, should have, been different.  Hindsight is always 20/20, but what about foresight?  Having the prudence and perception to see what lies ahead and the courage to take a stand and make a difference is a quality that is rarely used.  We rally to the cause after the effects have the damages are done… some of them irreparable.  What if measures were taken before Trayvon Martin ever went on that fateful walk?

In 2005, George Zimmerman was charged with assaulting a police officer and in that same year, his ex-fiance filed a restraining order against him for domestic abuse.  Why would someone with a propensity for violence be allowed to carry a firearm?  Why is it that anyone applying for a carry license not scrutinized further?  But because citizens want to stand on 2nd Amendment principles and don’t want to infringe on others’ constitutional rights, a 17-year-old kid will never have to opportunity to fulfill his life or express his beliefs or examine his own rights.

Trayvon Martin did not live in the gated community that served as the scene of his demise.  In fact, Martin was only there because he was suspended from school for marijuana possession and was spending the time with his father who was visiting his fiancée who lived in the community.  But why was Martin out to begin with?  Was a bag of skittles and a sweet tea necessary, and if he was suspended for misconduct, what sort of punishment, if any, was he given that allowed him to walk to the store for a snack?  What happened to discipline, structure, guidelines that instilled in him that not only what caused his suspension was unacceptable, but there were consequences?  And even if it is was deemed okay, why was he in a strange neighborhood walking alone when everyone knows the stereotypes associated with young African-Americans?  No, from all accounts, his actions never warranted being confronted and there is no circumstance to justify his killing, but could it have been avoided altogether?  Are these the consequences he deserved?  Absolutely not.

On a February 26, 2012, Martin walked through that gated community and Zimmerman pursued him.  I have no doubt others in the community witnessed this ordeal play out and not one intervened.  No one joined Zimmerman or aided Martin and no one spoke up to squash the matter before it escalated into the killing of a 17-year-old kid.  How many times does society expect to turn a blind eye before it is completely blind?

Tragically, Zimmerman killed Martin and a media and legal frenzy engulfed Sanford, Florida. The police were lax and sloppy in their investigation of the incident and arrested and charged Zimmerman six weeks later only after it turned into a media and public firestorm.  Quick to believe Zimmerman’s account and biased to the parties involved, the police accepted that a 17-year-old kid, in the wrong place at the wrong time, when confronted by a self-appointed neighborhood watchmen, attacked his accuser, whose only defense was to kill a child.  Despite 911 recordings telling Zimmerman not to pursue, not to confront, stay in your vehicle, the police still chose to believe that the dead kid lying across the lawn was the instigator.  But again, these are the same law enforcement personnel that Sanford chose.  Bill Lee was the police chief that was elected by the people and who was fired on June 10, 2012, amidst the Zimerman/Martin turmoil for an alleged lack of trust by city officials after refusing to initially arrest Zimmerman.  Should he have been in that position to begin with it?  Did he represent the community completely and was he the best representative for the Sanford police department.  Better yet, did everyone who was able to vote voice their opinion and cast their vote to elect the best possible official to protect and serve them?

Zimmerman finally was arrested and had his day in court to be judged by his peers; peers who eventually would be six women, five caucasians and one of hispanic descent.  The theory of a “jury of my peers” is one that is intended to be symbolic of the community as a whole and not regulated to only one sect.  Each party, prosecution and defense, are allotted peremptory challenges to secure a jury that will render a favorable outcome, as well as voir dire to narrow the pool further, but how does it become so disproportionate that it is strictly one-sided?  How in a county of more than 425,000 citizens the jury only has a representation of females that are predominantly white?  How many didn’t show when summoned for jury duty?  How many again didn’t vote  and a district attorney was elected who chose a prosecution team that poorly represented and failed Martin and the county of Seminole, Florida?

Finally, the stand-your-ground law that sparked the ballyhooed and heated debate.  This law was voted on and passed unanimously throughout the state of Florida.  Lawmakers may have never imagined the impact such a law would have and how individuals may use it to execute others under the guise of standing their ground.  The law states a person is permitted to use justifiable force to defend themselves when there is a reasonable belief of threat.  What the law doesn’t state is that if you have the ability to retreat, to avoid, to disengage, that those measures should be taken first.  It does not state that if a individual is walking through a neighborhood, has not caused any infractions or broken any laws, has not attacked anyone or committed a crime, that individual can not be confronted.  It does not say Zimmerman had the right to follow or confront Martin and it definitely does not say he had a right to kill him.  In Florida, where the alleged self-defense shooting cases have tripled since the law passed, it has been criticized as dangerous and unnecessary by many city and state officials.  Zimmerman’s ultimate defense was not the stand-your-ground law, a law he studied and was very versed at before killing Martin, but because of it, his arrest was delayed and the investigation and prosecution was stalled and handled inadequately.

The time to react is before the first punch is thrown.  It’s time to stop dodging the punches and avoid the fight altogether.  We have to be the change we want to see in our society.  It’s great to rally around a cause, to come together for righteousness sake, to pool our resources to right a wrong, but what if we used foresight to prevent the wrong before it happened?  We have to individually stand up and be accountable, vote, show up for jury duty, participate in our communities, hold our kids to a higher standard and discipline them when necessary.  We have to be an example of all we want to see.  Challenge the gun makers and lawmakers and let them know that profits are not more important than the people in the community.  Make sure our elected officials are representing the best interests of the citizens they serve and that they are not serving their own agendas.  Separately we are weak and our efforts are futile, but together we can make a difference and impact our society in a greater manner.

Let’s start running the race from the beginning instead of pulling up the rear and tackle the challenges head on from the onset.  How many more Trayvon Martins must die before we stop the George Zimmermans of the world before they ever get started?