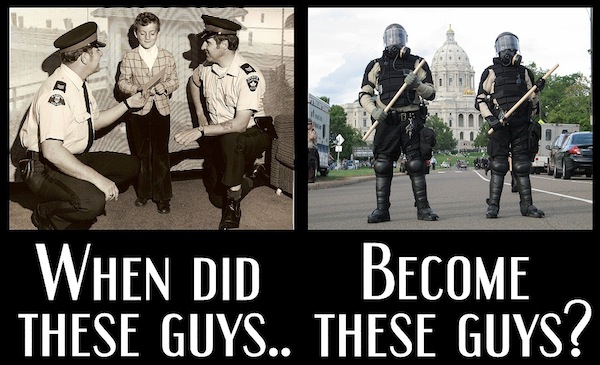 What is this country coming to!  In 2015 alone we have seen firsthand the disconnect between law enforcement and society.  The divide is growing greater and the disparity in treatment is glaring.  As a African-American male, I have tried with great decisiveness to look at each situation with an open mind, take each incident based on its own merits, not to be quick to pass judgement, and attempt to look at it from multiple angles and various perspectives.  It is a sad day when despite every attempt to find a rational answer, the only thing left is that there is a sect of society who does not care about the very people who they have sworn to protect and serve.  There is a black eye on law enforcement and it is self-inflicted.

In McKinney, Texas, we all have seen the video of the officer brutally dragging and man-handling a young lady and brandishing his firearm at young males.  What a stark contrast to the treatment afforded the bikers in Waco, Texas.  Why are a group of teenagers and young adults at a pool party treated worse than a gang engaged in a shootout resulting in multiple deaths and injuries?  Please tell me where this makes sense.  How is this tolerable?  Or does it really boil down to ethnicity, the color of one’s skin, the neighborhoods they live in or come from?  Have we regressed that much?  Become that primitive, dare I say… ignorant.

It is no mystery or stretch of the truth that many of these incidents involved caucasian officers and black citizens.  Each incident can be questioned and if dissected piece by piece, there is plenty of fault to pass around, but it is not as cut and dry as it may seem.  One thing is very clear.  There are officers who have been assigned to police the communities that have taken their authority to a totalitarian level.  Although given the power to enforce the law, it does not mean they are above the law and therein lies the problem.  When anyone begins to act outside of the law of the land, including a disregard for humanity, that individual or group of individuals should no longer be in place of authority and should face the same penalties as anyone else.

How can a person remain jailed for three years without any remedies from the alleged system all while being repeatedly attacked by fellow inmates and the guards alike?  We could ask Kalief Browder, who was jailed as a teenager without being convicted of crime after charges were dropped.  That fact that he was jailed is not the anomaly.  The premise of charges being dropped is not unique.  It is the treatment he received while jailed and the failure of the system which ultimately and sadly lead to him committing suicide less than two years after being released that is the tragedy.  How many citizens have to die directly or indirectly by the hands of law enforcement before it is realized there is a systematic problem that has become an epidemic.

When did Office Friendly become public enemy number one?  People, let me rephrase, African-Americans are terrified that simple interactions with police officers could easily turn into a deadly encounter.  That is not how the dynamic was designed.  As much as the authorities have been commissioned to uphold the law, it was also set up that the communities and its citizens have an intricate role in maintaining peace and order as well.  When the authority and the citizens are at war, justice can never be served.  Minister Louis Farrakhan, made a very poignant statement.  “There really can be no peace without justice.  There can be no justice without truth.  And there can be no truth, unless someone rises up to tell you the truth.”  Not a follower of Minister Farrakhan’s doctrine and there are philosophies and beliefs we differ on, but I completely agree that truth must be spoken for peace to ensue.  We need to acknowledge that the system is marred and those in the system are failing.  Until it is addressed, the cycle of death and division will continue and we cannot continue to keep losing African-Americans senselessly without cause or provocation.  The madness has to stop!

This a cry and plea to get it together.  We all have to make the necessary changes, devise solutions, and mend the fences.  As law enforcement, it is imperative to understand that all trust has been lost and until it is reestablished and earned again, it will continue to be an adversarial relationship.  Enforcing order is one thing; maliciously degrading, humiliating, and demeaning another human being under the disguise of authority is completely different.  Everyone is not a criminal and is there is no unilateral approach.  Every situation is different and should be handled as such.  The color of my skin should not automatically determine I will be treated anything less than who I am – a human being.  As citizens, we have to once again respect the badge.  Every officer is not out to kill us or do us harm.  Every officer is not racist either.  There are plenty of great law enforcement figures out there who risk their lives daily to protect us all.  We have to be open to building bridges and not fences.  We have as much responsibility in fixing the problem as anyone else and that starts now by having open and honest dialogue.

I am beyond tired of seeing death after death by the hands of law enforcement, mistreatment of citizens by those in charge, simple and presumably innocent encounters tragically go awry resulting in lives lost, families destroyed, and communities crippled.  Are you not just as tired?

“Justice will not be served until those who are unaffected are as outraged as those who are.” ~ Benjamin Franklin